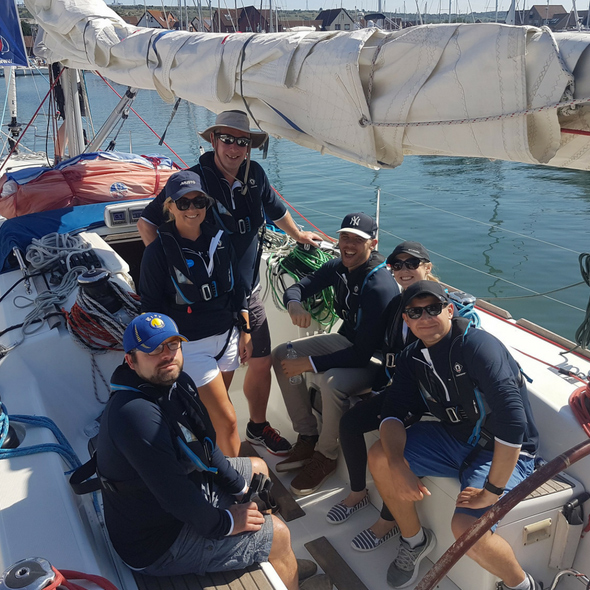 The Salesforce UKI Alliances & Channels Regatta 2018 has come and gone for another year. What a fabulous few days sailing on The Solent. The weather was perfect and as our captain said: "It made for Champagne Sailing!" Unfortunately, we didn’t defend our trophy this year but I couldn’t fault the crew for all their efforts over the two days.

On Wednesday morning, all the teams congregated in the Port House Marina in Portsmouth full of enthusiasm and excitement. On the Pexlify team, we had Colm Barry, David Greene, Jennifer Hurst and Geariod Beggan. On the Salesforce team, there was Karolina Borowska, Christopher Thomas, Niall Hughes and Gareth Connolly. This would be the first Regatta for most of the crew bar Colm, Karolina and Niall.

With some well-needed breakfast baps and strong coffee, we were raring to go.  After a short briefing, the team assembled and were introduced to our Captain and First-mate, Richard and Robbie. Without further ado, Captain Richard rounded up the troops, boarded the yacht and we were off.

It takes a good hour to reach The Solent from the harbour and there was enough time to practice a few manoeuvres. There are two basic sailing manoeuvres you need to master — jibing and tacking. Jibing and tacking take you away from or into the wind - or so I've been told. After a few practices, we were ready for the first race.

Like with any competition and limited practice, when the pressure comes on, mistakes can happen. Nonetheless, we performed well and placed mid-table around 11th. After some lunch and with confidence rising, we were ready for race 2.

This one did not go to plan. After the first leg, the decision was made to raise the spinnaker - well, I think that’s what it’s called. This is where the problems started. One could say there was some slight confusion over the names of ropes...the pole line, halyard, downhaul, etc. To further compound the ensuing chaos, 3 of the ropes were the same colour - all RED! Hence, most conversations went as follows - 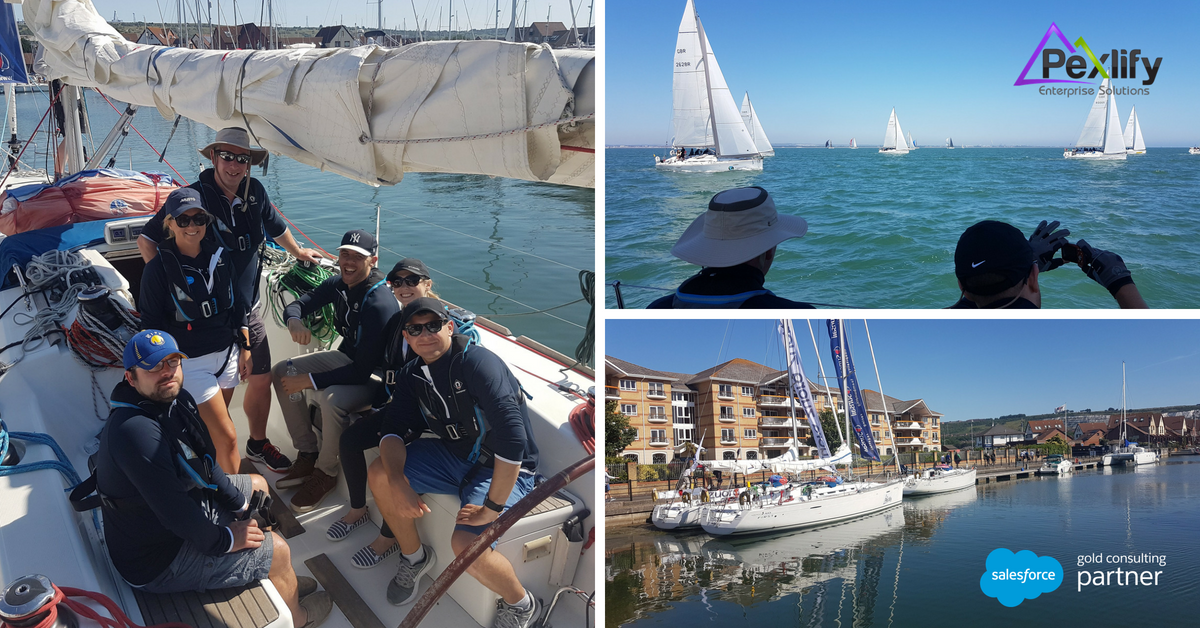 After the franticness of race 2, we wanted to get our composure back and attack race 3. Unfortunately, we didn’t fare much better and finished in 13th position.

As we pulled into Cowes Yacht Haven, there was definitely some weariness after a long day of sailing. This was nullified with some light refreshments on the boat and certainly picked our spirits up.

That evening was the Salesforce Awards ceremony. As we were all ravenous, we descended on the barbeque once we arrived and devoured everything that was on our offer. This was a great night, really well organised and plenty of food, drink and entertainment to keep everyone happy late into the night. Next year is our year and congratulations to all those who won on the night.

We groggily returned to the Cowes on Thursday morning for Day 2. We set sail at 10am and again had some time to practice. There was only one race and it was going to be long, finishing close to Portsmouth.

After the initial confusion about rope names and colours on Day 1, we had definitely learned from our mistakes and everyone felt more natural moving between stations. We started the race strongly and were vying for the top spot throughout. Once close to the finish line, the wind is notorious for changing direction and as we jibbed and tacked, the competition closed in. Eventually, we crossed the line in a very respectable 6th place.

After we moored up, we were back in the Port House for scones, cake, tea and coffee, as well as the prize-giving. Regrettably, we did not return with any trophy but look forward to reversing our fortunes next year.

Thanks again to Salesforce, Sunsail events and especially, Karolina, Niall, Chris and Gareth for all their hard work over the few days.

Already looking forward to next year!

What is Salesforce Lightning?